FOXBOROUGH - McDonald's is closing, the movie theater industry is in jeopardy, gatherings of ten or more people have been discouraged, and society has come to a pause. So why not add Tom Brady to the mix? If the simulation is truly broken, then it only makes sense that the one constant in New England's life for the past two decades is no more.

Tom Brady announced on Instagram this morning that he will be moving on from the New England Patriots organization over the course of a series of posts. Brady's statements, as well as those from Robert Kraft and Bill Belichick, can be read below. 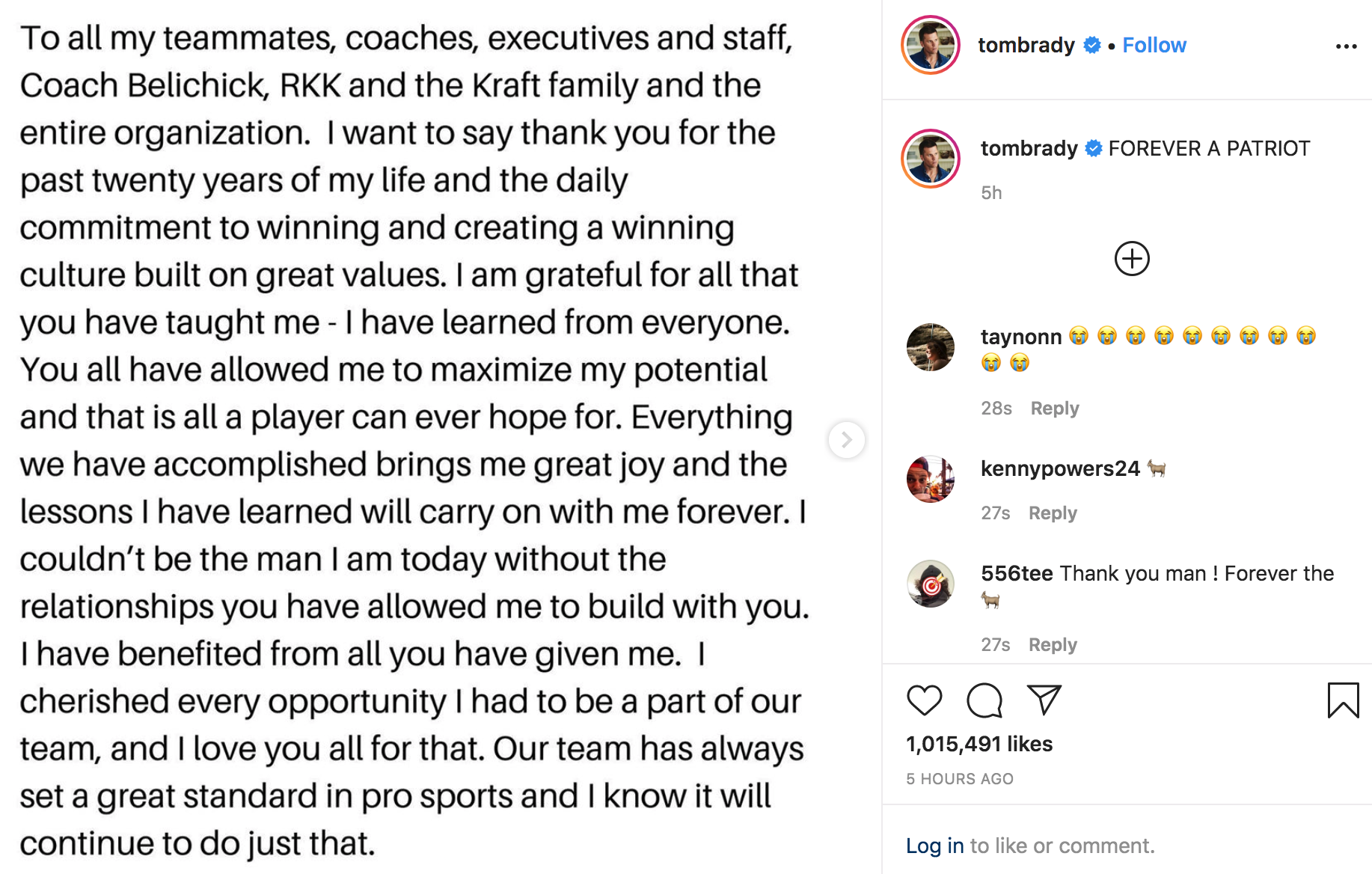 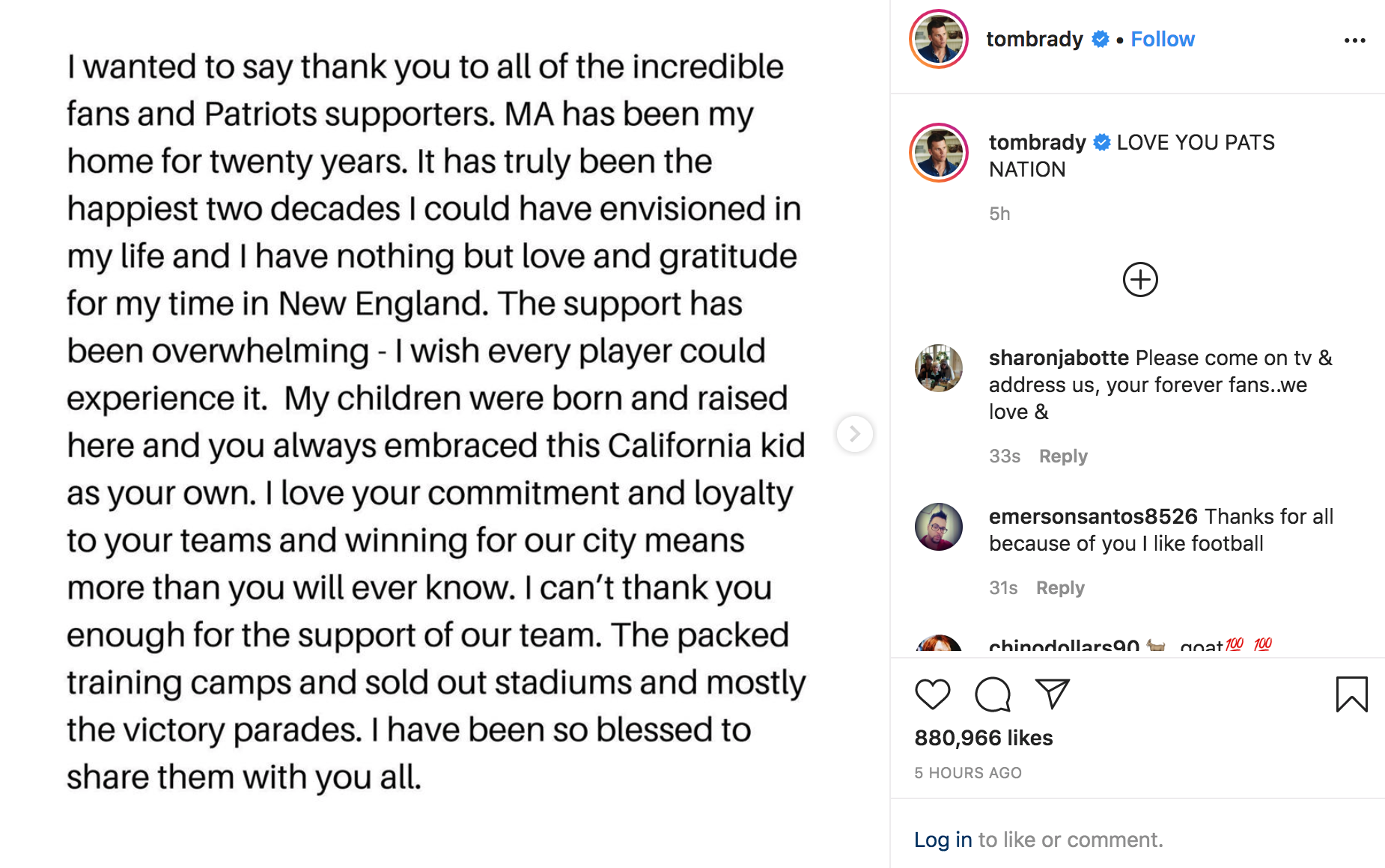 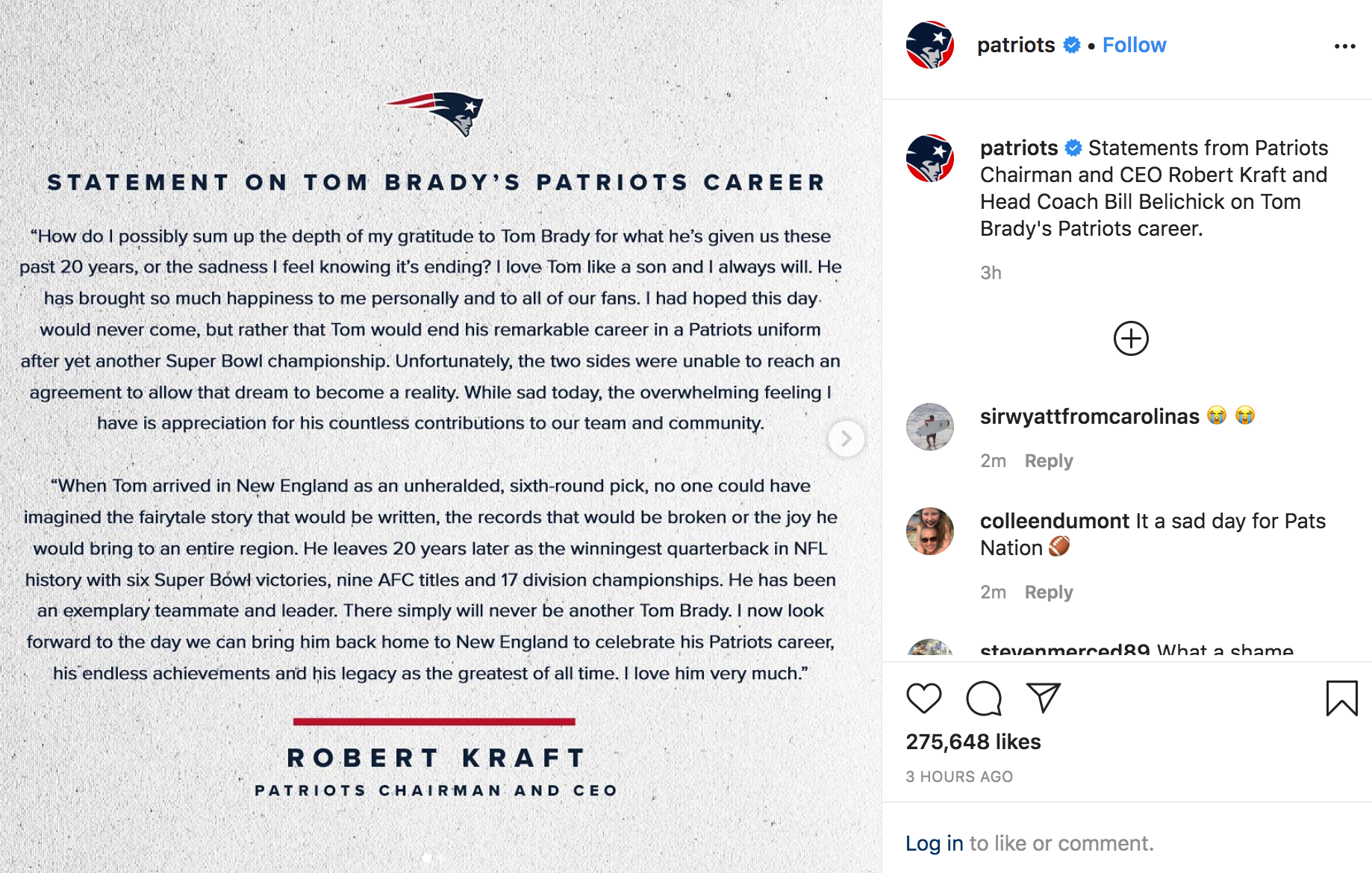 Yes, my heart is broken, but I can't pretend like we didn't see this coming. Belichick has practiced this strategy for years and I guess this settles once and for all that no player, not even the greatest quarterback of all-time, is bigger than the Patriots system. (But maybe Brady should have been? Just a thought.) If Brady cannot play his entire career with one team then no athlete can.

There is so much to write about regarding this scenario. For one, I have no idea who Belichick plans to replace Brady. Jarrett Stidham might be up to the task, but Dak Prescott's name has also been floated. I can say that I bet Brady joins the Los Angeles Chargers, especially in the wake of his production company announcement and the departure of Philip Rivers. It'll either be there or the Tampa Bay Buccaneers, for sure. I'll root for him loyally wherever he goes. Especially if this Patriots dynasty is truly over. (But the Pats will always have my heart, as well.)

Every quarterback leaves. Joe Montana played in Kansas City, Peyton Manning played in Denver, Brett Favre played in Minnesota and New York. I hoped Brady would be the exception, but alas. With six Super Bowl titles and the greatest dynasty in the history of professional sports behind him, he earned the right to do whatever he wanted. And I can't wait to celebrate Brady when Up to Boston comes back!

Tom Brady, I love you forever and I wish you nothing but the best wherever you go. You know you're a Patriots lifer and you will always be synonymous with this organization and welcome back whenever you desire. You've been one of the best parts of my life for my entire life. You're the only quarterback I've ever known! I adore you!

But I still can't help but feel like that was a bizarre headline to write.

BOSTON - Whether you are riding out this pandemic in self-isolation to stay safe (kudos to you!) or you are in self-quarantine, cabin fever can start to kick in. With that in mind, we have created a Top 10 list of the best Boston movies...

MASSACHUSETTS - Grocery chain Stop and Shop have announced they are implementing a host of restrictions in order to cope with the demands of the COVID-19 outbreak...

Tom Brady Announces Departure from the Patriots
Share this