FOXBOROUGH - Heading into Sunday night's game between the New England Patriots and the Houston Texans, one of the top matchups to keep an eye on was between DeAndre Hopkins, one of the league's best receivers and Houston's best player, and Stephon Gilmore, the best cornerback on the Patriots and in the league. The Patriots ultimately lost the game by a score of 28-22, but it was by no fault of Gilmore. He limited Hopkins, a consistent deep threat, to just five receptions for sixty-eight yards. No touchdowns were permitted to the top tier talent.

Much of Houston's scoring came courtesy of their other elite receiver, Will Fuller, but this did not stop Hopkins from taking to social media after the game to throw some shade in the direction of Bill Belichick, the Patriots defense, and Gilmore himself. He shared an image of himself with the ball, running over Gilmore, with a caption alluding to the idea that New England tried to double team him and failed. Of course, your idea of failure is dependent on whether or not you believe that limiting Hopkins was effective. I think five catches for under seventy is a pretty good job defensively. In my mind, Gilmore won the matchup. 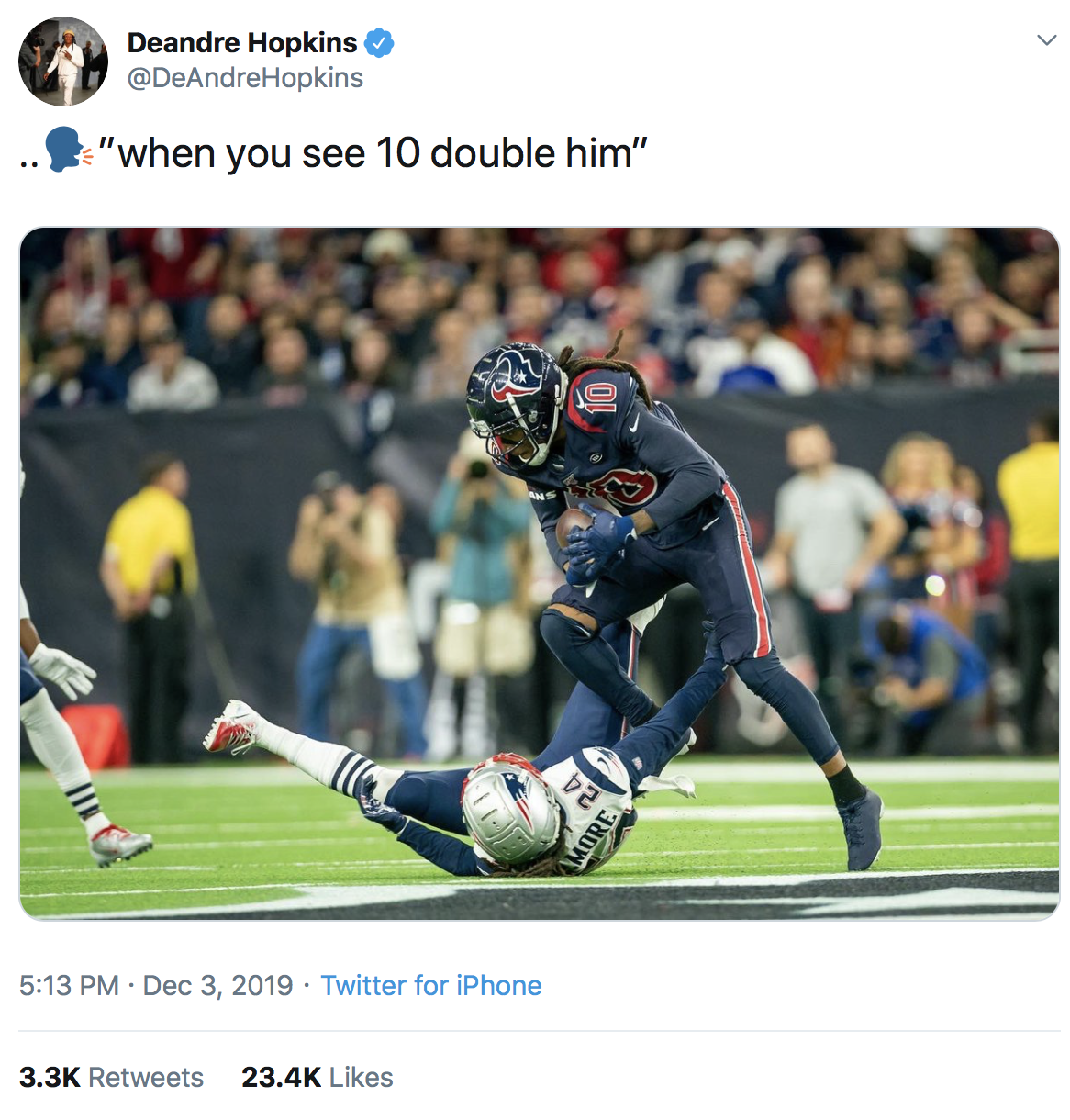 Typically, the Patriot Way is to keep your head down and ignore the chatter from social media and the NFL talk sports machine. But Gilmore decided to take to Twitter, as shared by 98.5 The Sports Hub, to chirp back at Hopkins and call him out. He tweeted that Gilmore was only double teamed twice and threw in a little dig to the Texans wideout.

Patriots linebacker Kyle Van Noy also joined in on the chatter to support his teammate with a tweet, per Yahoo Sports.

In all likelihood, Belichick is not happy that his players are taking to social media to get into petty squabbles with one another. In his mind, they're adding fuels to the fires of motivation that could eventually lead teams to play with increased confidence against the defending champions. (At least, this is how chirping has worked in favor of the Patriots in past years.) But it all seems to be in good faith and it's not too mean-spirited or anything like that. I enjoy seeing the personalities of Gilmore and Van Noy come out. If anything, Hopkins is the one who initiated it and egged them on. I'm sure the Patriots defense will continue to play at an elite level.

BOSTON - For the longest time during the 2000s, no team in all of sports had a better one-two punch than the Boston Red Sox...

More Than 60 Latin King Gang Members Arrested In Federal Sting. Those arrested include associates, leaders and members of the gang throughout the state. [NBC Boston] Mild Snow Storm In The Forecast For Friday...