BOSTON - When Brasserie JO finally closed its doors after a twenty-year run in 2018, it didn’t signal an overnight absence of French cooking in Boston. Just the loss of Jean Joho, a man as synonymous with helping to contemporize regionally derived French cuisine as he was notoriously averse to the spotlight.

But you can’t judge a chef by the lack of their status as a public spectacle anymore than you can their hairstyle. If you could, the sight of Guy Fieri wouldn’t strike fear into the hearts of small children around the globe. And while Joho has yet to reveal his future plans in the restaurant industry, you can probably imagine it won’t include Boston. You had your chance. Twenty years worth, in fact. Now you’re stuck with speakeasy themes and condescending stereotypes evoking the mystique of bloodthirsty totalitarian regimes more than they do any sense of “decaying elegance.”

Codependency. It’s the engine of the hospitality industry. No hotel can hope to survive in a market estimated at $185 billion per year unless they’re offering the highly cultivated perks your disposable income so ably demands. And if you’re going to be shelling over $600 a night for a full-scale luxury experience with absolutely no sense of shame, your disposable income needs day spas, 24-hour access to personal trainers and a finely tuned sense of hermetic impregnability to deflect from your own piddling self-worship. The rest of us will simply have to make do with a 49 cent cup of instant noodles at an Econo Lodge in Passaic. Let them eat Maruchan, Chuckles.

A luxury hotel without a four-star restaurant is like a Honda Accord without a vanity plate. It’s unimaginable. Both your vanity and your infantile need for instant gratification and affirmation should be nourished by a luxury hotel. That’s the premise that the Colonnade was built on. And that’s the premise behind Lucie, the Colonnade’s designated placeholder for Brasserie JO which opened this past Thursday.

Hemmed by executive chef Michael Chandler (formerly of Grill 23 and Oak Long Bar), Lucie promises a comfort-food friendly menu that doesn’t appear to offer much in the way of any theme or distinction. From handmade pizzas to traditional pasta dishes, burgers, and steak. Probably delectable, but somewhere you can tell Chef Joho is chuckling to himself all the way back to Chicago. 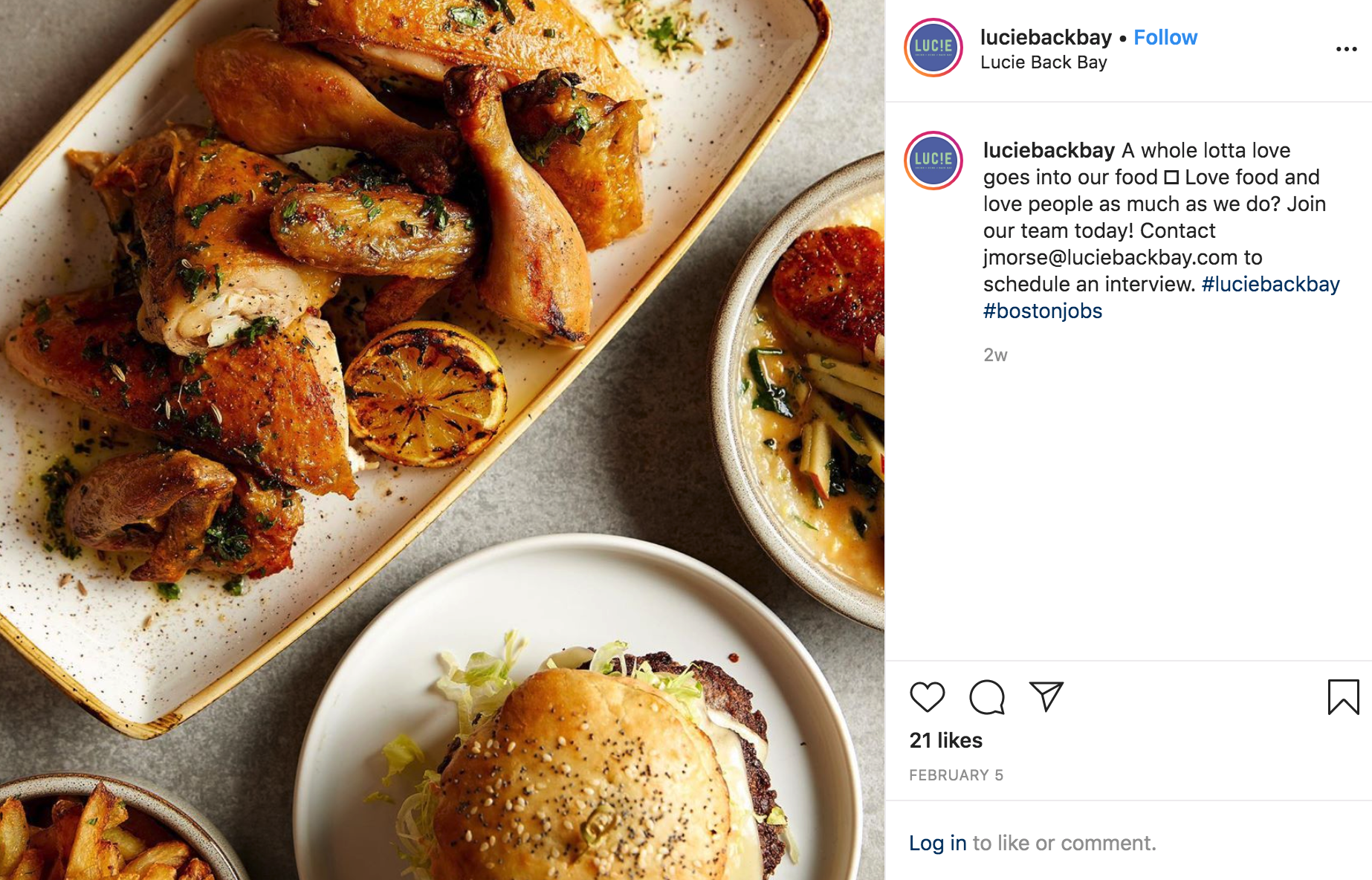 But it’s not about food. It’s about an experience. A playful and approachable experience. That’s how Lucie likes to bill itself, and that accessibility appears to permeate all aspects of its operation. Dog-friendly Instagram posts, replete with truly frighted looking canines posing next to an open bottle of Veuve Cliquot? Yeah, that’s a necessity for the Back Bay. Pop-art homages to Mick Jagger and Kate Moss—two faces you emphatically want to be reminded of while gorging yourself on a grass-fed double stack burger? Also emblematic of the Back Bay. A build-your-own-soft-serve-ice-cream-sundae bar? Hold on to your iPhone, Dalton; you’ve entered Belmont territory.

“We have a thousand toppings,” Howard Wein, Lucie’s owner, told Boston.com earlier in the month. “No other restaurant does this. I’ve done so many restaurants — I’ve done Buddakan and Morimoto in New York, all these intense, A-list, super sexy [restaurants]. I was like, you know what? This is about living life every day. Not taking everything so seriously, but making sure that it’s seriously good.”

Intense. Super-sexy. A-list. The man obviously knows of what he speaks. Still, doubting the quality of your life? Howard has you covered. A build your own ice cream bar for adults and an endless capacity for tawdry escapism. Thanks for the tip, Howie. May lesser men aspire to your facial hair.

BOSTON - Last week, I began the countdown of the ten greatest Boston movies ever made by writing about Black Mass and Fever Pitch...