BOSTON - I want to provide a quick disclaimer at the outset of this article. The biggest concern of the coronavirus is the safety and well-being of other people. To anyone who has lost a loved one from the virus, my heart goes out to you. That is obviously what matters most here.

That being said, I think much of the recognition on the part of Americans, and certainly on the part of myself, that the coronavirus concerns are far more legitimate than I ever could have anticipated came yesterday when dominos fell in quick succession.

There are so many actions being taken here in the United States that many other countries have taken already that it is hard to keep track of them all, but I will do my best to hit some of the highlights from the past two days.

For one, the sports world was shocked when the NBA announced that the season was suspended. The announcement came after Utah Jazz star Rudy Gobert tested positive for the coronavirus. It is a strong possibility that many other NBA figures and employees may have been infected with the virus as a result of Gobert's case and his teammate, Donovan Mitchell, who has already tested positive for it as well. It is one of the craziest decisions in NBA history, but it absolutely makes sense and is the right thing to do.

There is no word on, or when, basketball will return to finish out the 2019-20 campaign, but appropriate measures are being taken. One of the most inspiring moments to come out of this current situation is Mark Cuban's response to the shut down as he shared that he plans to do whatever he can to help support the hourly workers who will be most impacted by the season suspension.

Another real wake-up call came when Tom Hanks posted on Instagram that he and Rita Wilson tested positive for coronavirus while beginning production on a new Elvis Presley biopic in Australia. I really admire what Hanks wrote on Instagram because I believe he made the post with the hopes of convincing people to take the coronavirus much more seriously than they have been. 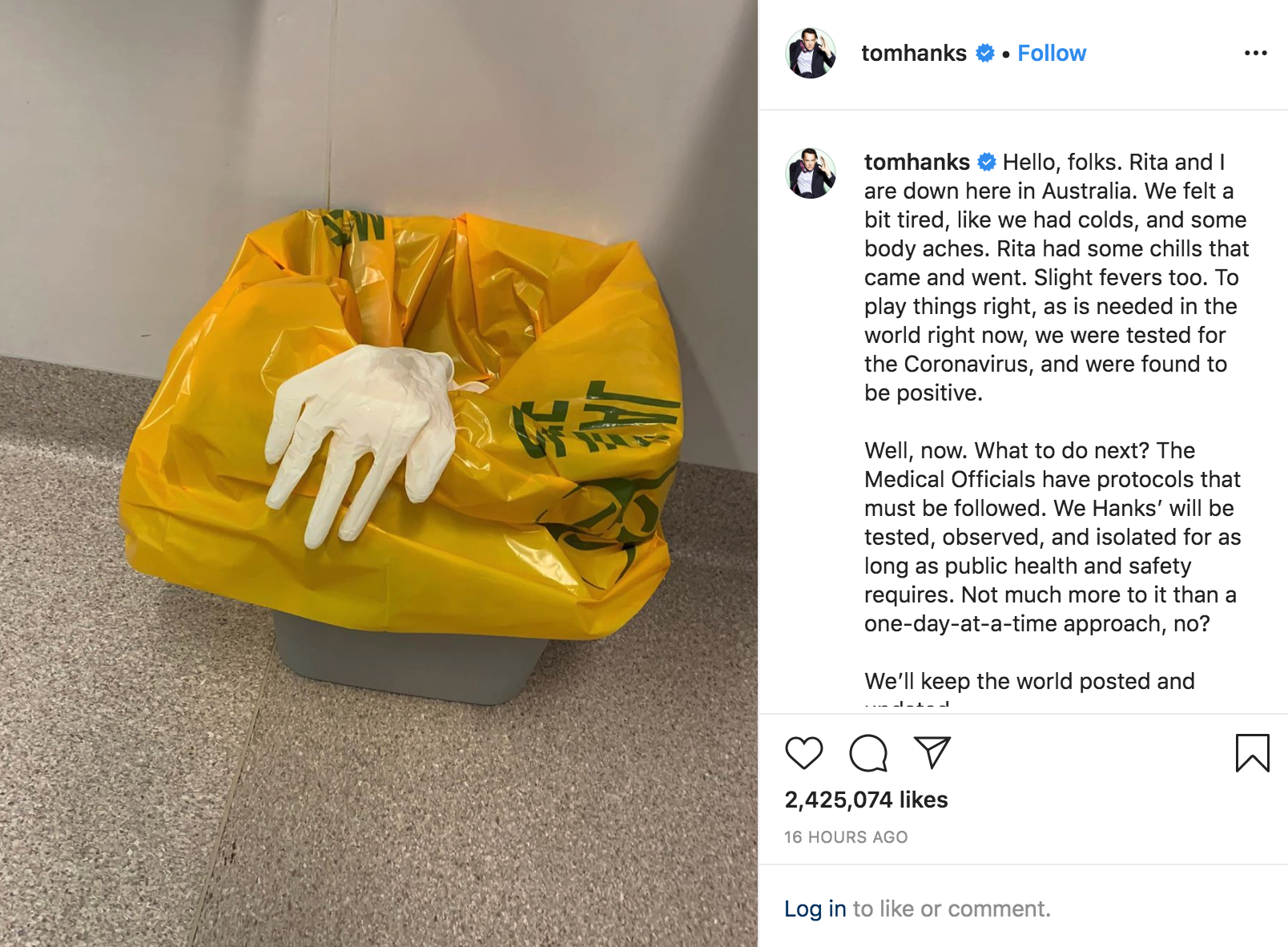 It says a lot about the state of the world in 2020 when a social media post from Hanks does more to reassure, educate, and caution the public than a statement from the actual president of the country.

The coronavirus news cycle is not going to stop anytime soon. But everyone should stay safe and heed the proper safety precautions. Let's do our best to make sure everything is going to be okay.

Yes, it is quite literally impossible to keep up with the insane news cycle, but the sports world was rocked even further in the past hour. The NHL announced that they would be suspending their season, in accordance with the NBA’s decision yesterday.

Additionally, it is likely that the MLB season is going to be delayed after the decision to suspend spring training was announced. Obviously, sports play second fiddle to the real concerns at play here, but there is no denying that this is an insane time in the world. It feels like life is about to be put on pause with no end date in sight expected for the next month or so.

We will, of course, have more on these developments in the coming weeks. It will be tempting to bemoan the halting of a stellar Boston Bruins season, but let’s look on the bright side. At least we don’t have to watch a Mookie Betts-less Red Sox team quite yet.

ALLSTON - Throw a rock and you’re likely to hit any number of regional Asian cooking styles in the greater Boston area. There was a time when Chinatown itself offered only two choices to diners: Cantonese or dim sum...

AMHERST - This week has been an absolute whirlwind in the news, both on the national level and on the local level...